Da pan ji (大盘鸡 “big plate chicken”) is one of the few foods that is equally popular among Chinese and Uyghurs. It originates from Xinjiang, but is claimed by neither group: Uyghurs regard it as a Chinese dish, and Chinese regard it as a Xinjiang specialty. Regardless of who originally came up with it, it’s become quite popular in the rest of China and can even be found in Chinese restaurants abroad.

Just like the name, it’s a big plate of chicken stewed in a rich, spicy sauce with potatoes, green bell peppers, and chilies. The star anise makes it amazingly fragrant when complete. There are plenty of variations in the sauce and how it is served: some places serve it with noodles, other with bread, others just by itself. I personally love eating it with Uyghur nan bread to soak up the sauce.

This recipe is adopted from JadeCw’s recipe on Xiachufang as well as Abdulaziz Salavat’s version.

Directions:
Prep: Chop the potatoes into medium pieces – not too big or they won’t cook through, not too small or they’ll get overcooked and make the sauce starchy. Chop the chicken into small to medium-sized pieces. Chop the green bell peppers into medium-sized square pieces.
1. Heat the wok on high heat and add oil. When the oil has heated, add a small amount of sugar (1-2 teaspoons) and mix well.

2. When the sugar has melted into the oil, put in the chicken and stir fry this until it is browned. The melted sugar will give the chicken a nice golden color. 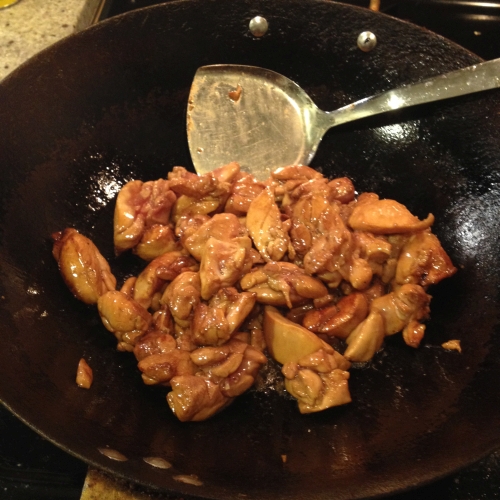 3. Put in the onions and cook these until soft and light brown. 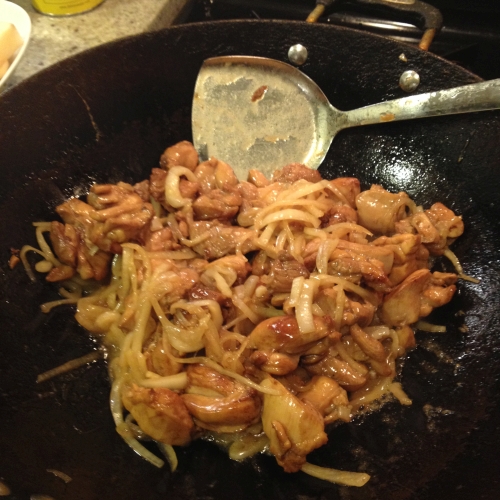 4. Add the black bean sauce, chili garlic sauce, and tomato paste. Add a good dollop of each – maybe 2-3 tablespoons worth. Mix everything well.

5. Salt, and add the dried chilies and Sichuanese peppers, mixing everything well. Add in the potatoes. 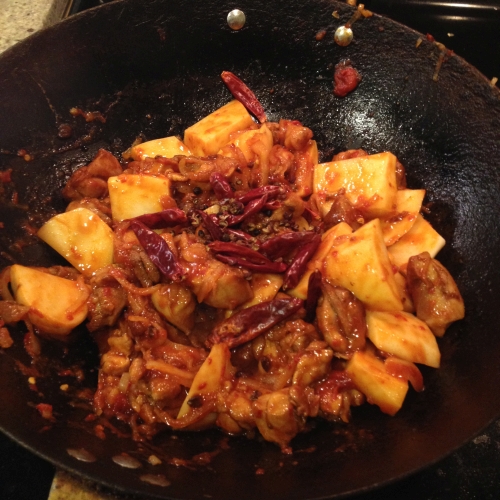 6. Add soy sauce, add the beer or wine (if you are using it), and add enough water so the broth almost covers everything.

7. Put in the star anise. Once the water boils, turn the heat down to medium. Mix everything well, cover the wok, and let this cook for at least 25 minutes. 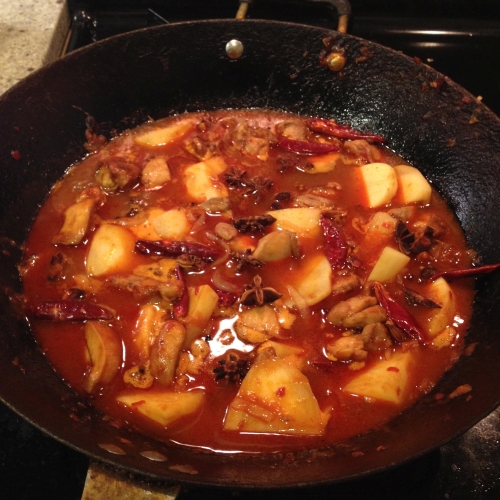 8. Taste the sauce and reduce if too watery. The sauce should be spicy, aromatic, and savory. Finally, add the bell peppers and let them cook briefly. Dapanji is one of those dishes that tastes better the next day after it has been sitting in the fridge; the flavors thicken and become more complex with time. Ideally, let it simmer over minimum heat for a while before serving. Serve in a big serving plate; you can put noodles or bread on the bottom to soak up the sauce, or serve them separately. Enjoy!